One of the most exciting aspects of the Delta Connectors 0.3.0 is the addition of write functionality with new APIs to support creating and writing Delta tables without Apache Spark™. The latest release 0.4.0 of Delta Connectors introduces the Flink/Delta Connector, which provides a sink that can write Parquet data files from Apache Flink and commit them to Delta tables atomically. This sink uses Flink’s DataStream API and supports both batch and streaming processing.

A bit of background for Apache Flink and Delta Lake before we dive into the details for the connector.

Apache Flink is an open source distributed processing system for both streaming and batch data. It is designed to run in all common cluster environments, perform computations at in-memory speed and at any scale with fault tolerance and extremely low-latency. You can use Flink to process high volume real-time data streams as the data is being generated and after it is stored in a storage system. This enables real-time streaming applications and analytics.

In order to write a Flink program, users need to use API-agnostic connectors and a FileSource and FileSink to read and write data to external data sources such as Apache Kafka, Elasticsearch and so on. All connectors are in the general part of the program submitted to Flink. In this case, a program is either a jar that contains the connector dependency (DataStream API, Table API) or a SQL query where it is assumed that the Flink cluster can access the connector dependency accordingly. For more information about Flink, see the Apache Flink documentation.

Delta Lake is fundamentally an advanced storage system that consists of storing data in parquet files with partitions, and maintains a rich transaction log to be able to provide capabilities like ACID transactions and time travel. In addition, the log also contains metadata such as min/max statistics for each data file, enabling an order of magnitude faster metadata searches than the “files in object store” approach. For more information, refer to VLDB whitepaper Delta Lake: High-Performance ACID Table Storage over Cloud Object Stores.

The features listed in the diagram below make Delta Lake the optimal solution for building data lakehouses.

Delta uses optimistic concurrency protocols for storing metadata and transaction state in the underlying object store. This means that Delta tables can maintain state without needing any actively running servers and instead only need servers for executing queries, thus leveraging the benefits of separately scaling compute and storage.

For those of you who have leveraged Flink to build real-time streaming applications and/or analytics, we are excited to announce the new Flink/Delta Connector that enables you to store data in Delta tables such that you harness Delta’s reliability and scalability, while maintaining Flink’s end-to-end exactly-once processing.

The Flink/Delta Connector is designed to create Flink’s DataStreams API sinks for both batch and streaming use cases in append mode. The connector ensures that the data from Flink is written to Delta Tables in an idempotent manner such that even if the Flink pipeline is restarted from its checkpoint information, the pipeline will guarantee no data is lost or duplicated thus preserving the exactly-once semantics of Flink. If the pipeline is restarted without a checkpoint, then there are no guarantees for exactly-once processing.

The goal of a DeltaWriter is to manage bucket writers for partitioned tables and pass incoming events to the correct bucket writer. One writer can write data to multiple buckets (also called partitions) at the same time but only one file per bucket can be in progress (aka “open”) state. If the Delta table is not partitioned, then there will be only one bucket writer for one DeltaWriter that will be writing to the table’s root path.

Delta files can be in 3 different states:

This committable is either for one pending file to commit or one in-progress file to clean up. In addition, it contains the metadata of the written file, application unique identifier (appId), and checkpointId to which the committable belongs.

DeltaCommitter is responsible for committing the “pending” files and moving them to a “finished” state, so they can be consumed by downstream applications or systems. It receives various DeltaCommittables from DeltaWriter and commits the files locally, putting them in “finished” state so that they can be committed to the Delta log during the global commit.

The Global Committer combines multiple lists of DeltaCommittables received from multiple DeltaCommitters and commits all files to the Delta log. 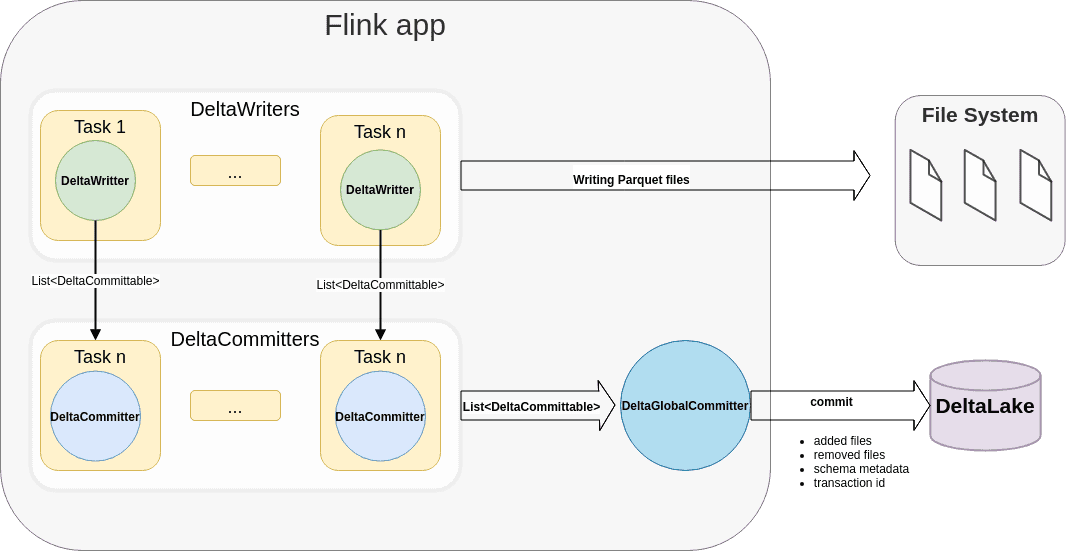 The Flink/Delta Lake Connector is a JVM library to read and write data from Apache Flink applications to Delta Lake tables utilizing the Delta Standalone JVM library. It includes:

The Flink/Delta Sink is designed to work with Flink >= 1.12 and provides exactly-once delivery guarantees. This connector is dependent on the following packages:

Please refer to the linked build file examples for maven and sbt.

In this example we show how to create a DeltaSink and plug it to an existing org.apache.flink.streaming.api.datastream.DataStream.

In this example we show how to create a DeltaSink for org.apache.flink.table.data.RowData to write data to a partitioned table using one partitioning column surname.

More information on how to build and test is here.